DFG funds further expansion of a database for researching graffiti

Since 2016, researchers from the University of Paderborn and the Karlsruhe Institute of Technology have been building a database that allows graffiti to be systematically researched. The INGRID project ("Informationssystem Graffiti in Deutschland - Graffiti Information System in Germany"), in which Prof. Dr. Axel Ngonga, head of the Data Science working group, has now been extended for a further three years and is being supported by the German Research Foundation (DFG) with around one million euros.

The digital graffiti image database developed by the scientists enables systematic examinations based on high-quality research data for the first time. "Graffiti images that were made available to the project exclusively for scientific use will be digitized, annotated and made accessible to research," says project leader Prof. Dr. Doris Tophinke, linguist at the University of Paderborn. Each image is specified so that users can search specifically for visual, linguistic and material properties such as colour, technology or content. “Around 40,600 graffiti photos have been accessible to scientists since mid-2019. In the course of the expansion, further collections of the inventory, which currently comprises more than 150,000 photographs, will be opened up, "said Tophinke.

Graffiti emerged in the United States in the late 1970s, closely related to the hip-hop scene. Since the 1980s, they have increasingly spread to Germany. As a persistent youth cultural phenomenon and in their combination of writing and image, they are the subject of research today. The scientists involved in the project are particularly interested in the aspects of visual aesthetics, grammaticality, urban location and the social function and meaning of graffiti. The image database is also exciting for disciplines such as media studies, sociology or urban planning. Tophinke added: “Since there is information about the place of origin and the time of the creation of the pictures, it is possible, for example, to create city profiles that show the connection between urban infrastructure and the emergence of graffiti as well as the analogies between the development of graffiti and social and urban developmental changes."

Together with Prof. Dr. Martin Papenbrock, Department of Art History at the Karlsruhe Institute of Technology, and Prof. Dr. Gudrun Oevel, head of the Centre for Information and Media Technologies at the University of Paderborn, the database will be further developed and expanded in the coming years. 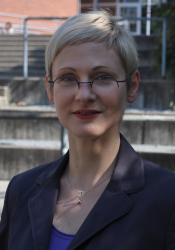 (Photo: Judith Kraft) Prof. Dr. Axel Ngonga participates in the development of a database for the systematic research of graffiti. Download (90 KB)